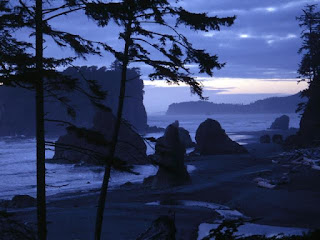 Until one has the conviction that, he is an individual separate from the world and world existed prior to him, and he is born in this world afterwards, he will not be able to cross the threshold of duality [illusion], which he experiences as reality.  If  one accepts the duality [illusion or mind or waking] as reality he will never be able to grasp the ultimate truth.
The duality is reality only on the standpoint of false self[ego].  There is a need to reduce mentally, the whole experience of diversity [man+ universe] into mind and mind into spirit [consciousness], in order to realize the nondual truth.  Consciousness itself is ultimate truth.
Seeker must first know what is before him. If he cannot know that, what else can he know or understand? If he gives up the external world in his inquiry, he cannot get the whole truth.
One cannot know the truth until one knows the stuff from which the mind[universe] is created. The goal of pursuit of truth is to realize the fact that, the true self is not physical but it is the formless soul/ spirit/consciousness.
Many people are struck with awe or reverence at the outer indications of renunciation, and thus blindly accept a man to be a Gnani. The two have no connection. Because he has no wife, no family, and no possessions" they think man who has merely repressed these desires as though these things had anything to do with wisdom he is mere religious man. People are quite incompetent to judge who is a Gnani between god men, intellectuals, and yogis. A Gnani is neither a god men, nor yogi, nor intellectual.
The man who speaks about god, scriptures and religion is not a Gnani. A yogi who speaks about yoga is not a Gnani. A God man who indulges in miracle is not a Gnani. An intellectual who argues on his own speculated theories is not a Gnani. A Gnani is the one who guides people towards the source of the mind [universe or physical existence] is real Gnani. A Gnani never claims himself a teacher nor does he accept any one as disciple.
The first step is of knowing “Self" is not physical but it is formless spirit.  The second is to know the spirit is ultimate truth, the "whole." Then alone he knows truth and wisdom, i.e. the whole truth.
“Soul” [consciousness] as “Self “is the key that opens the door of ultimate truth. This understanding is certainly necessary at the first stage, when the mind is wandering. At the end the mind gets stilled and knows its formless essence and becomes one with it. Then there is no witness nor witnessed everything is one and the whole.
The formula "What is ‘I’?" presupposes the existence of an ‘I’. But this is only an assumption. Before proceeding to act on such a formula one ought first to inquire whether there is such a thing as an ‘I’.
Those who have been baffled by unsuccessful enquiry, reading, intellection, have to find out what are the obstacles on the way, what is blocking them from grasping, understanding and assimilating the non-dual truth.
Yoga is intended to remove the hindrance in pursuit of truth such as sexual desire, worries, anxieties, desire for wealth etc. and also to enable one to keep out from irrelevant thoughts whilst making inquiry, analysis and reasoning.
All this has to be done before indulging in pursuit of truth. Therefore yoga has only a negative value and is a preparatory stage. Pursuit of truth starts from what is seen, i.e. the three states.  Wisdom comes from both knowing the three states and the formless witness of the three states.
To leave out one of these parts is to prevent attainment of wisdom. "Who am I” is useful no doubt, it has certainly a value in its place, and gives some knowledge of self as, the Witness. But what about the witnessed? The three states are mere object to the witness. It must also be looked at. If the witnessed [three states] is ignored, then "Who am I” cannot give the full truth.
“Who am ‘I’” is   yogic enquiry; not the spiritualistic; the latter deals with the whole of life whereas the former deals with a part only.
"Who am I” inquiry limits only to the physical entity, because there, is no person in truth but only in the illusion of mystics.  ‘It should be "What is I?".
The question "Who am I” is a religious, not a spiritualistic question. It is a most selfish one. It is on a par with "What shall I be after death?" and "What shall I get in return for my good karma in next life?" It is purely egocentric and it is based on the false self.
Only the people who are serious in knowing the truth can lift their thoughts above ego and ask "What is the mind?"  All  the three states  put together make the soul/self, not merely the ego questioning itself ''What is  I.”
People are most interested in themselves before they gets interested in the world therefore, the "Who am I?" inquiry leads only to reveal half-truth.    The “Who am I? – Inquiry is useful as a first stage to show the illusoriness of ego and thus help seeker to get rid of it. It helps the seeker to prepare him to consider the higher question: What is the world, what is mind, what is “Self” the truth about which cannot be learnt by those attached to their ego, with its prejudices against idealism, etc.