born into the Surat Shabd Yoga and initiated by Kirpal Singh Ji at the age of 5 and 14 years, with 14 years having gone with my mother to his ashram in Delhi

Lalitha Devi was born in Africa into a spiritual orientated family her father gave her the name Lalitha and her mother was her first yogateacher who taught her Sirshaasanam at the age of 8. When she was five, she was initiated into the Surat Shabd Yoga and started to meditate sitting next to her mother. With 14 she came the first time to India in the ashram of her spiritual teacher Sant Kirpal Singh Ji and had the opportunity to sit in front of him asking him the question of how to love God the most. With 19 years she went to South India (Madras) to study the sacred classical Indian Dance Bharata Natyam, Sanskrit, music and Yoga in Kalakshetra where she met Rukmini Deviji who made an extreme impression on her as a serious minded student, and her way of realizing the essence of the spiritual impact of the Indian Dance. After 7 years of a very strict monastry life she left Kalakshetra with the PG Diploma. Back in the West she started to perform and to teach. Her desire to build bridges between East and West and to express spirituality through the medium of dance was her main ambition. Slowly she left the traditional field and started her own Indian Dance Creations to north Indian, western classical music and spiritual poetry. By chance she met Svami Omkaranandaji who gave her the first inspiration to recite his poetry and spiritual sayings on CD and to put it into expression and dance movements, which he wanted her to perform in the ashram. She discovered while performing and doing sessions in psychotherapeutical clinics that the Indian Dance is much more than a performing art but a form of dancetherapy. Finally she made the experience in her own life ,how dance, yoga and meditation helped her not only through phases of difficulties (divorce etc) but also through a breast cancer operation. The latest biggest project of "Siddhartha", where the spiritual essence of H. Hesse`s novel is expressed through the Indian Dance, is in her eyes the final project which in its depth reflects her own life and attitude which is, if one wants to put it into a few sentences: Life as a play in which we all play our different roles and the life in the presence and "here and now" being the way to meditation and finally to inner peace.

Be in the Now 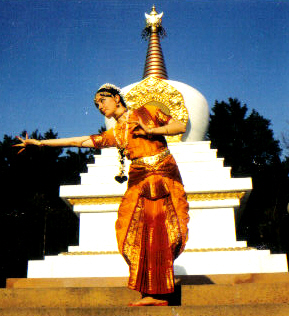 "not in India , but in Austria in front of a buddhist pagode" "as a poetic soul , i was always alone sitting and dreaming or writing poems in my diary - one i like to share :
Oh God , when will you finally let me hear the whole of your cosmic music which you composed , and in which my life plays only a little…" "music , singing and painting , Sanskrit language ..all this was part of the seven years post graduated diploma training" "our teachers were very strict ...may be that s why i am extremely soft with my students" "under the big banyan tree reciting early morning the prayers of all religions , since Kalakshetra and Rukmini Devi was a Theosophist - we recited a Hindu Sanskrit , Buddhist , Christian and Theosophical prayer ..after that our Sir was teaching us…" "me sitting in front of Lord Shiva every morning before our classes started at 7.30 it is 30 years back ..." "this foto shows me 30 years back being trained in Kalakshetra ( Chennai / India ) under very hard , disciplined and monastry like conditions"