Before I talk about the coming 2013 Kumbh Mela, I will write the customary few things about this event which you can read from various sources , I have not written anything that is not already known to my readers but I will keep updating about the event on a first hand basis every now and then.

I will update about places to stay, when to reach, and any other info that the readers might want in my following blogs.

The Legend
The observance of Kumbh Mela is based upon the following legend: Thousands of years ago, in the Vedic period, gods and demons made a temporary agreement to work together churning Amrit (the nectar of immortality) from the Ksheera Sagara (primordial ocean of milk), and to share the nectar equally. However, when the Kumbh (urn) containing the Amrita appeared, the demons ran away with it and were chased by the gods. For twelve days and twelve nights (equivalent to twelve human years) the gods and demons fought in the sky for possession of this pot of Amrita. It is said that during the battle, drops of Amrita fell at four places: Prayag, Haridwar, Ujjain and Nasik. Thus, the Kumbh Mela is observed at these four locations where the nectar fell.
Rituals of Kumbh Mela
The Triveni Sangam, or the confluence of River Yamuna and Ganges River, where
devotees perform rituals. Kumbh Mela is attended by millions of people on a single day. The major events of this festival are the ritual baths at the banks of the rivers in each town. These days are called Snan Parv and the crowd is unbelievable. Other activities include religious discussions, devotional singing, mass feeding of holy men and women and the poor, and religious assemblies where doctrines are debated and standardized. Kumbh Mela (especially the Maha Kumbh Mela) is the most sacred of all the Hindu pilgrimages. The difference between Kumbh and Maha Kumbh is that the former falls every 12 years whereas the Maha Kumbh falls every 144 years. Year 2001 was a Maha Kumbh. Thousands of holy men and women (monks, saints and sadhus) attend, and the auspiciousness of the festival is in part attributable to this. 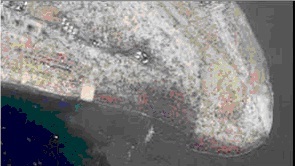 I hope my friends will understand that mythology and religion are entwined and hence whatever  I write about the legend  has been passed on to us through scriptures but whatever I write about the current developments can be verified.